In fact, it's been a fair wee while since I revisited an old favourite. What with the successful Meikle Bin campaign last week I elected - not for the first time - to ramp up the training with a return to the Trossachs. It was all rather leisurely, I have to admit. Another sober Friday night meant I was up and aboot at 7am on Saturday; in Tesco for brown rolls and salmon spread by 8:15;  and packed and en route by 10. I left Molly at home, just in case two excited dugs proved too much for someone not yet quite firing on all hillwalking cylinders.

The route I followed, as ever, is the one set out here. The forestry track marker posts, incidentally, are pretty good, although it'd be easy to overshoot a couple of them if it was your first visit. You get your first glimpse of the target less than five minutes after you leave the car park: Ben A'an through the trees:

You can't beat an atmospheric wander through a forest. There's sticks, for one thing. And fungi, for another. Some of the previously hard-felled areas are starting to regenerate a bit, taking the edge off a couple of harsh looking sections. 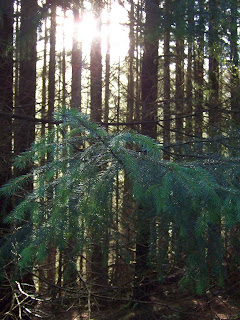 What have changed for the worse though are the underfoot conditions beyond the forest, all the way to the start of the climb proper. It's always been boggy, but...crivvens, there's a good forty minutes of uber-swampy sponge sprachling now. Deeply unpleasant - literally, albeit still displaying autumn palette colours...

The sensible advice would be to pick a line up the steep heathery slopes direct to the ridge as soon as you're able to do so (five minutes beyond the waterfall, basically), and I wouldn't be surprised if there'll be signs of a developing path there very soon. As usual though, I just ploughed my own furrow up the semi submerged traditional route. You can get too much excitement in the hills. Once you reach the big cairn that sits on the low point of the ridge, the muddiest difficulties are over, and the views keep opening out. 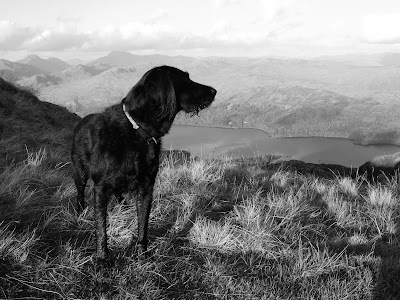 And then you're up. As a small point of interest, if you get this photo as big as it'll go you can just about make out the bump on the horizon that is Meikle Bin, where we were last week. (I've stuck in a subtle location aid.) 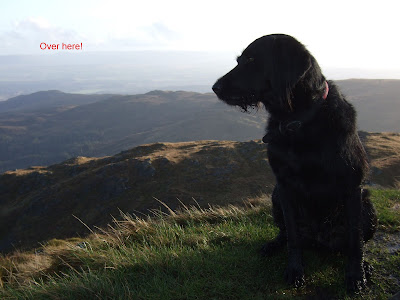 Hmmm. I wonder if I could form a chain of "previous week's visible hills" all the way from here to Ben Hope? It'd take a few weeks, right enough.
;0)