Or at least give the ignition key a tentative turn. I'm not saying that today's triumphant return to Ben Vrackie has set us up for a renewed assault on the Munros, with the consequent edge-of-seat-blogging for an expectant nation that such would entail, but it was a good day out. Ninety minutes to Moulin, Three hours up and doon the hill, and back home for 2:00pm. Corbetts and Brownie points, that's the ticket.

Just don't ask how sore my legs are, eh?

1. Here's the WBD and Andy's Maura at the summit, just to prove we made it: 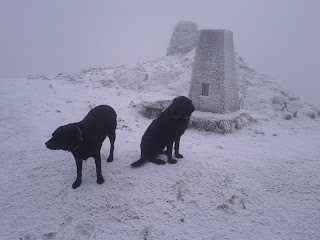 2. If you want to see what Ben Vrackie actually looks like, you'll need to rewind a year.