I suspect that even a fleeting analysis of my Munro-bagging progress will reveal that nobody has ever taken as long as I have to get close to completing the Mamores. I say "get close" advisedly, because there's still one of them to knock aff. Nonetheless, I've had several really good days out there over the years, so it's hardly a source of regret. Indeed for a while Sgurr Eilde Mor was a kind of fallback staple, if the weather wasn't too promising, and I fancied a proper longish walk.

Now, while I enjoyed the trip to Sgurr a' Mhaim a week or so back, I don't think it's ever going to qualify as a regular "go to" hill. It's a bit steep, like.

We had set off with faint thoughts of having a go at the Ring of Steall, but time constraints and other commitments rather put paid to that early on. Having said that, we could have had all the time in the world and I doubt I'd have been in much of a mood to climb anything else after what is quite accurately described in the Pocket Mountains route description as a "punishing" ascent. I certainly felt roundly chastised. 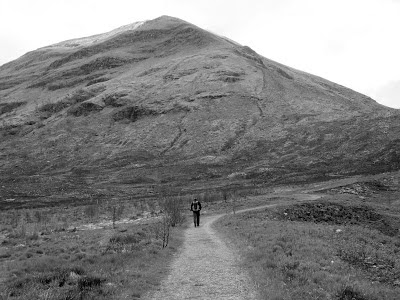 We started from the same point as our day out to Stob Ban a while back, and the views of that hill - and indeed just about everything else in Scotland - almost...almost made up for the upwards struggle.

Rather than heading straight on into Coire a' Mhusgain though, you take a smaller branch path that appears on the left,and heads excitedly up the north west spur of Sgurr a' Mhaim.

It's not a bad path lower down as these things go, but even when you know that keeping a steady pace is the best method of gaining height quickly, it was much easier said than done. Whit's that alarming noise you get in your knees sometimes? Crepitus, is that the term? Well either I was getting that worse than usual, or Glen Nevis was echoing to the sound of rifle fire.

There's a couple of minor levellings on the way, which give momentary respite...

...and one of those seems to contain another path that heads off to the left, to find a route that brings you out beyond the summit, and indeed below the Devil's Ridge - which by this time was also on the agenda, a possibility that didn't entirely delight me or my vertigo. ...and ignoring all bypass options, at about 850m the whole underfoot conditions changed markedly. Now, I've trudged up boulder fields, and across scree slopes, but I'm not sure I've ever experienced quite the combination that this hill offers.

Although there were boulders, and there was scree, the actual path for long stretches was comprised of a mixture of smooth round pebbles, and what appeared to be roughcast chippings which, when placed on a slope of such impressive gradient rather made it feel as if you were trying to walk up a marble staircase. Covered with real marbles.

There were a few moments when it was just so tiring, and we were making so little progress, that I thought I'd probably have to throw in the towel. Now, given that I was simply walking up a stony path, that seems faintly ridiculous, but it was just taking so long that frustration was getting the upper hand. I suppose that when you're gaining just over 1000m of height in a linear distance of around 3500m, then it will take a bit of huffing and puffing. And whining like a Jessie.


Still an' all, you were getting an unusual angle on Ben Nevis and the CMD arete by this point: And the last 100 yards or so of walking  is just the ticket. As Ralph Storer puts it: "The final stretch along the narrow corrie rim is almost pleasant enough to make you forget previous exertions and soon you'll be enjoying life again at the summit". 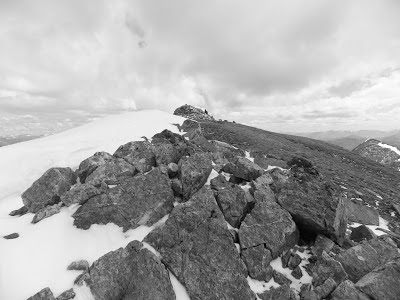 So - whaur next? Back down the way we came, or would our hero stiffen his resolve and proceed to the Devil's Ridge? Place your bets.