I was here about 6 months ago, so a combination of prior route knowledge, the wintry weather, the daylight shortage, and the fact that Andy still had to pick this one off meant we left Airdrie at 7am on Saturday and headed up the A9. The forecast looked to be well off the mark on the journey up - we'd been promised clear skies and good visibility and as far as the Dalwhinnie turnoff it was just wet, dark, blustery blizzardish unpleasantness.

The issue of getting out the car at all once we reached the layby at Loch Laggan was still very much a live one.

Once we got there however there was a bit of a break in the clouds, things cheered up generally and we figured that the dugs could do with a walk anyway so we'd head on out to the bridge at Lochan na h-Earba and take stock. That's only about an hour from the car, so it's a useful marker. Arriving there successfully, albeit not in record time, it seemed the right thing to do to press on at least until we reached the fork in the path that leads over to the shoulder of Geal Charn proper. There was a fair covering of snow up to this point. Another few inches and the path would have pretty much disappeared altogether, although given that I've been along the track here about five times in the last year, location finding shouldn't really be an issue.

Skye (Andy's weimaraner), and the Wee Black Dug were making the most of things, chasing each other hell for leather through the deepening snow cover as we started the hillside ascent. There must have been something odd about the consistency of the snow here, because Jorja's paws started to get clogged up, causing her to worry at them and limp occasionally, and that's something I haven't seen her have a problem with before. The hirpling was short lived, thankfully; as soon as the snow was soft enough for her paws to sink in a wee bit she was fine. (Molly's coat is notorious for this sort of thing, which is why she's strictly a three season hill labradoodle!)

The trudge up was seriously heavy going. Admittedly we haven't been out for a while, but the depth of the snow, coupled with the icy rocks just below the surface made for slow, strenuous progress. We also had half an eye on the clock, given we knew it'd be dark about four-ish, and we hadn't left the car until 10:30. It had also started to snow quite heavily, and the wind was getting up a bit. It wasn't a blizzard, but the snow was whipping around a bit in that damp yet face-stinging way that really gets on your wick. A lull in the wind and a quick break in the clouds enabled a comforting visual check against the last compass bearing, and we soldiered on in stoic silence. Which was lucky, because comparing notes back at the car we both agreed that had the subject of retreat been remotely mentioned by either one of us, we'd have been doon the hill again before you could even think about beginning to utter the words Jack Robinson. That was partly to do with the fatigue, but mainly because of the cold. Eye freezing stuff. Yon cold that kind of...hugs you and sucks all the warmth from your bones. Or something. Chilly, and no mistake.

I'm not sure that we were in danger of getting a warning from any passing SSPCA types, but I was feeling slightly guilty about the dugs by the time they reached the summit. I rather doubt that Skye's fetching buff, polar or not, was making her feel toasty, and Jorja's beard didn't thaw out until we got back to Stirling, but deep down I'm sure there was a bit of them that was enjoying the experience.

I'll not go into any detail of how the biting cold was affecting Andy in particular, but it would be remiss of me not to mention how glad he was that he'd brought a spare woolly hat with him, which provided vital additional insulation for an important appendage that wasn't getting sufficient protection from his distinctly non-technical thin fleecey tracksuit breeks. Even though my nose was frozen, I'm not sure I could entirely empathise with what he was going through.
;0)

It wasn't a day that afforded much in the way of photographic opportunity - too cold to stop apart from anything else - but I got a couple of hastily taken snaps. Plenty of snowy photies of the general area on here already, of course. 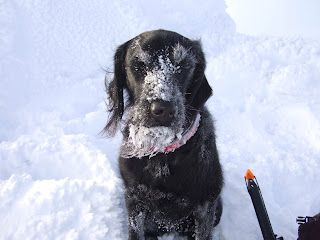 At the end of the day I felt pretty pleased about getting the hill done in 6 hours on the button. Given the lack of fitness and the amount of snow, it felt like a good enough effort.

If I'm honest though, I'm bloody sick of the snow already. It's here too early. You can almost sense the wildlife giving a collective shudder of despair. It could be a long, long winter. Mind and keep feeding your garden birds, folks.